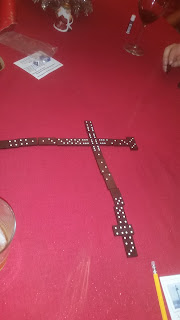 In our family, we play dominos for holidays!! Or at least we just started with my mom's white elephant Christmas present. What can I say? Board games maybe old school, but its a way to take a break from all the digital fiasco!

The time has come for us to get our travel plans and new years resolutions together for the new 2016. Still, we can't forget all that we've accomplished in 2015 alone. I enjoy taking a moment to reflect upon some of the goals that I was able to achieve and how I can build on some of that momentum in the new year.

This last year was definitely a rebuilding year for me --having entered into a new job, in a new industry of media advertising. It was an exciting opportunity for me to enter a new field, allowing me to tap into some new skill-sets that I did not realize having before.

One of the many benefits of working for the media agency I work for now is that there is an incentive towards employee development programs, one of which being public speaking. As I said in earlier posts, the fear of something new and risky was something I tended to avoid, with the fear of failure being too great. But I soon learned that being to cautious was not good for self development --that I would often find myself in stale waters.

Speaking in front of others --or in some respects just speaking in general --was very scary to me; my heart would clench up and I would start to shake. But my time working with a start up made me realize that the greatest tool in this life was the ability to communicate and influence ideas. The only way to do that was to speak in front of people. When my company announced that they would be launching a Toastmaster's chapter exclusively for their employees, I jumped at the opportunity  even though every ounce of my being told me not to, still yet, I've come to the point where if something makes me nervous, I do it!!

Now, almost a year later I've completed 3 speeches of the 10 speech program and I couldn't feel more optimistic about the future!! I couldn't describe the rush of preparing for a speech and delivering them successfully. I remember the days leading up to each speech and how I was a nervous wreck --having to perform them in front of a room of people I don't even know. But I soon bought into the program so much that I volunteered to become the club president, believing in the value of public speaking towards your professional life and in so many ways, although I am still new to the program, I became a mentor for some of the newest members which was exciting for me.

As we approach the new year, the idea of developing myself as a writer and a public speaker is very exciting but also very nerve wracking. I am such a recluse and I tend to enjoy my thoughts and feelings to myself. To be in a position where I have a platform to share my voice is frightening because it requires me to become very vulnerable. But, with that uncertainty, my new perspective tells me to build the courage and keep going after it!

To finish off, I would like to share some items that I actually included in my most recent speech. The theme of the speech centered around an end-of-year theme.

5 Things I've Learned After My First Year in Toastmaster's:

1. Learn to relax within the moment:

A lot of the times, I get so nervous that I tend to rush through my speeches that my nervousness would just amplify beyond recognition. Learning to settle in and embrace the moment sounds counter-intuitive, but in the end, it is a great helps.

Confidence comes from what you know and knowledge is power. Constantly educate yourself on topics that interest you so that you can become an authority so that it may translates into your presentations. Also, you cannot fake preparation. People claim to work the best when they "wing it", but intelligent people can see through the smoke and mirrors. So if you want to speak about something that matters, prepare and know your stuff.

3. Make mistakes, they make you grow:

I am my own worst critic. Beating myself up and bringing down my confidence psychologically was my biggest set back from trying anything new and taking big risks. But having failed at a start up in spectacular fashion taught me that there is life after failure and that mistakes can be our biggest teacher.

Early on in Toastmaster's, I noticed that I would smile the widest when I would get nervous. Subconsciously, this would counteract my anxiety because smiling projects confidence and good energy towards others and in return they will smile back. So this would create a positive feedback loop that will just reinforce a better environment for your speech. So practice showing off those pearly whites.

5. Communication, it's only the driving force of civilization:

This final point is more of a broader observation with little hard evidence on my part, but I firmly believe that communication is why mankind is where it is today. Our ability as a species to communicate ideas and thoughts to one another has allowed us to thrive throughout the centuries. To forgo that skill is like refusing to learn to read or write --or to a greater extent walk and run. Speech is our evolutionary advantage as a human. Learn to develop it every now and then folks!

Finally, as part of all of your new years resolutions, think about the following: What are your daily items of practice? What are you trying to get better at every single day?

Let's make 2016 the next big step towards answering that.

#17 Why So Angry? Podcast: Three's a Crowd When Talking About Being Present

#29 Why So Angry? Podcast: #BLACKLIVESMATTER